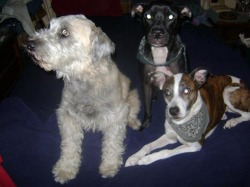 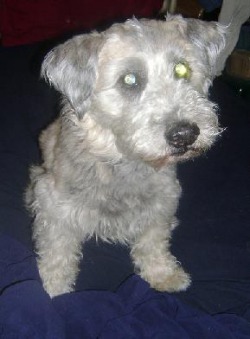 Story: Buddy was a flea market rescue. An acquaintance of my sister's saw this pitiful puppy cowering in fear tied to a table . To add to her horror when the pup did something his 'master' didn't like, a pellet gun was fired at him (luckily none of the pellets hit). The acquaintance asked to buy the pup, forty dollars later he was on his way to a new place. This was not his home to be, due to bad events with a prior dog she couldn't keep him. Lady luck was looking out for the little guy. She gathered the puppy and went searching. She came upon my sister's husband at the time, with no warning she placed the puppy into his arms, and said, "Keep him, find a home for him but don't take him to the pound". He had no idea what to do with the fluff ball, he couldn't keep him then he remembered that my family was looking for a dog. He gave Buddy to my family. He was scared of every thing. He didn't know how to play, wouldn't bark, one look at him or a loud voice and he would submissively pee. That was eleven years ago. Now Buddy is barking non-stop, playing like a young pup, and lives life. He loves to play fetch though he doesn't quite understand 'bring it here'.

Personality: Buddy loves attention, and to be close to his 'pack'.  It takes him a long time to accept people into our home, and tends to bark to get them to leave. He is still timid of people, and may or may not get along with other dogs that are not in his 'pack'. He does like babies, He’s helped us raise orphan kittens. He has rightfully earned the nickname Mama Duck. Buddy is also an anchor for Demon, Buddy must be with Dee when he gets his shots, his nails trimmed, a bath, and just about everything. 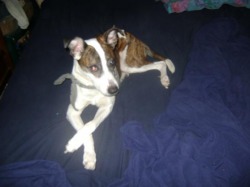 Story: Demon is another flea market pup. My sister use to go every weekend to flea markets for this, that and the other, but nothing live. She had always stopped at this one place it didn't hold any interest for her she just liked to look at the ducklings, chicks and on occasions rabbits, but on March 2 the store had a large kennel that had four puppies in it three red in color and an odd ball for sale. she looked at them, walked off then came back and asked to see one, the odd ball, he was at the back of the cage and wouldn't come out, she said when he was taken out he had given her a look as if saying "don't take me out of this cage unless you plan to take me with you". She handed the small pup back to the person went over to our mom and told her she wanted the odd ball, after finding her (at the time) husband, asking him for money, he didn't quite have the full asking price so she asked our parents if she could borrow the rest, still shying a little she tried anyway, the seller accepted what she had. My sister didn't want to carry the pup around the flea market so she took her favorite chain, put it around the pup's neck to mark him as 'sold', walked around for a few minutes then went back and got him she couldn't see him in the cage any longer. the pup was suppose to be a Jack Russell/Pit Bull mixed so she thought he'd stay small so she gave him to her husband at the time because he had just recently lost his childhood dog, but due to his work schedule the pup formed a bond with my sister. Six years, lots of research on his breeds and a divorce later, Demon is still with her. Now a forty pound lap puppy and 20 inches tall, she knows he's not the mix he was claimed to be, she's fine with that and it doesn't stop him from stealing blankets and hearts every chance he gets.

Personality: Demon has two speeds 25 mph and 0. At times we think it be a good idea to have a very large scraper around. Demon loves to run, and chase any thing. But he's happiest lounging in a chair or on the bed or in somebody's lap, preferably with a blanket. Dee’s very vocal with people is knows. Demon is very picky on whom he calls "friend", but he is very tolerant. 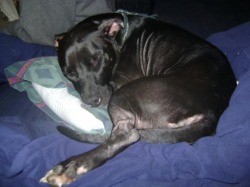 Story: Gemini came from a "breeder" that allowed her mother to have a litter ever heat cycle because he didn't believe in altering his dogs. One female and 3 males -- a recipe for disaster, and many litters of salable puppies.  Though I will say the "breeder" did care for his pets, they were in good health. My sister’s ex-husband got  one of the pups in trade. Within days of getting her he asked us to puppy-sit. Two weeks later he came back for her, (keep in mind that everyone thinks Gemi “belongs“ to my sister, Gemi KNOWS she‘s our fathers) but it was too late she had formed a close bond with our father. The ex took her home for one night. The next morning she was right back at our home, and he was complaining that Gemini wouldn’t stop whining all night, nothing he did would shut her up. Another two weeks passed. When trouble hit. The ex wanted her back, and we didn’t want to give her back. We had been caring for, and supporting her for two weeks with nothing from him. The fuss was not about us having her it was the fact he wanted reimbursed for what he paid for her. He finally gave in because he owed our mother money. They call it a deal, we kept Gemi and he got out of paying what he owed. That was four years ago, and we still have her.

Personality: Gemini is energetic, and good-natured. She loves meeting new people especially older gentlemen. Gemini is by far the most obedient pup we have. Gem is very protection with her family, especially with my father, and sister.  She does have her corks (stealing coffee, pillows, and hearts), but we love her all the same.
http://www.petalumaferalcats.com/tabby2.html